Are You Preparing For DSSSB Exam? Grab This Opportunity Now. ENROLL NOW

The mean of distribution is commonly understood as the arithmetic average. It is computed by dividing sum of all the scores by the number of measures. We denote the mean by ‘M’, the first letter of the word Mean. The formula is, 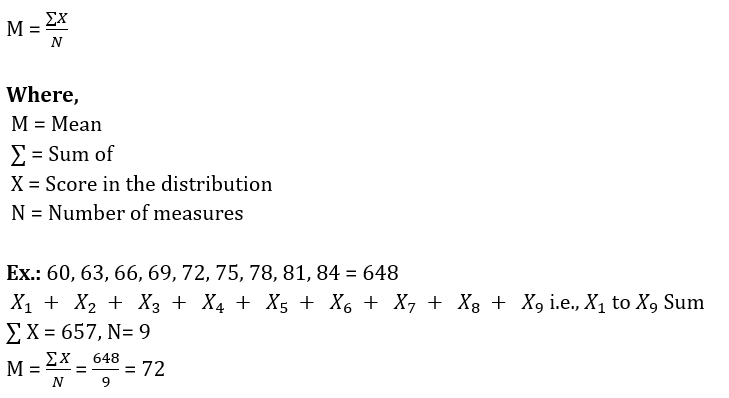 Calculation of Mean from Grouped Data :

When the scores are more in the given data, the above method is not useful then the given data is to be grouped into frequency distribution and then mean is calculated by different methods namely, the Short Method and Long Method.

The scores have to be arranged either in ascending or descending order. Find out the middle score by dividing the total scores by two. Count from one end of the series to find out the below and above which N/2 of scores life. This point is the median.

When the data is classified into frequency distribution, the median can be computed by using the formula given below.

Advantages of the Median :

Disadvantages of the Median :

The mode is 48 since it occurs most often.

As we saw in the selection on data, grouped data is divided into class interval. We have defined mode as the element which has the highest frequency and the mode itself, which calculate from the modal class interval using the formula below.

Advantages of the Mode :

Disadvantages of the Mode : (the following apply when the mode is used with ordinal or Interval/ratio data) :

Limitations of Mean, Median and Mode :